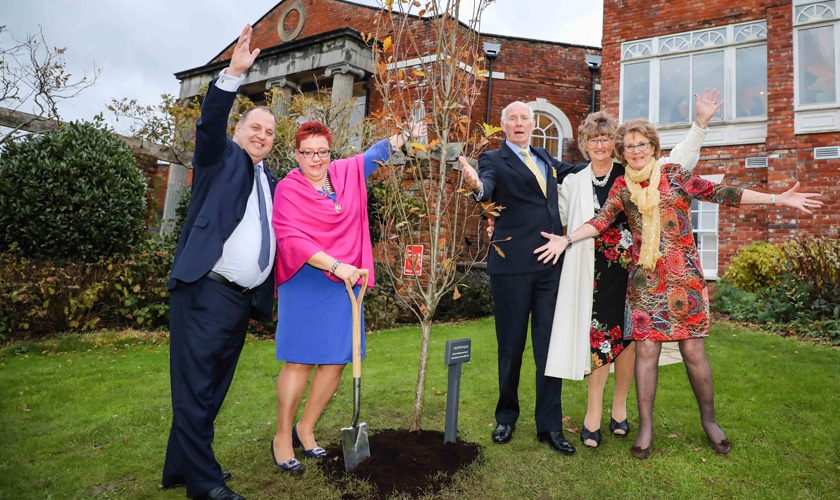 GROWTH: The Executive Association Solent celebrates 30 years at the Chewton Glen Hotel, New Forest. The membership organisation has held 331 monthly business luncheons at the venue since inception in 1989.

An oak was planted to mark the anniversary. From left, Andrew Cook, the hotel’s general manager, association chair Angie Beeston, association founder and secretary Stuart Percival, Veronica Atkins, association co-ordinator from 1990 to 1999, and, since then, co-ordinator Tricia Percival.

Tricia received a bouquet of flowers for 20 years’ service to the month. Nearly £2,100 was raised on the day for Simon Says, which provides child bereavement support in Hampshire. The charity is close to the heart of Sally Taylor MBE, a TV journalist and BBC South Today presenter, who was guest speaker at the 30th anniversary luncheon.

Nearly £2,100 was raised on the day for the child bereavement support charity Simon Says, which is close to Sally’s heart, having lost her mother when she was six years old.

Angie Beeston, Chairman of the Executive Association Solent, said: “We had an incredible 43 companies represented in the room today for our 30th anniversary, which is testament to the high regard that our membership organisation is held in.

“It is very much a meritocracy, with ideas, trends and market insights, with members young and old sharing entrepreneurial tips and drawing inspiration from the collective buzz in the room.”

Angie, who runs leadership and development coaching and business mentoring company Evolution 4 Business, said: “As an organisation, we seek to do good, and one of our aims over the next year is to carry out 30 acts of kindness.

“We also saw typical generosity in the room, with nearly £2,100 raised on the day for Simon Says, through table donations, an auction, the Executive Association Solent itself and a wonderful donation from Sally, who gripped the audience with her behind-the-scenes TV news stories.

“Furthermore, there was the tree planting, with a plaque commemorating the Executive Association Solent’s rooted relationship with the Chewton Glen over 30 unbroken years.”

Representing the Chewton Glen, named Hotel of the Year England 2019 in the AA Hospitality Awards, was Andrew Cook, General Manager.

Bouquets of flowers were presented to Veronica Atkins, co-ordinator from 1990 to 1999, and current co-ordinator Tricia Percival for 20 years’ service to the month.

As another special mark of respect for the anniversary, all retired chairmen were made honorary chairmen. 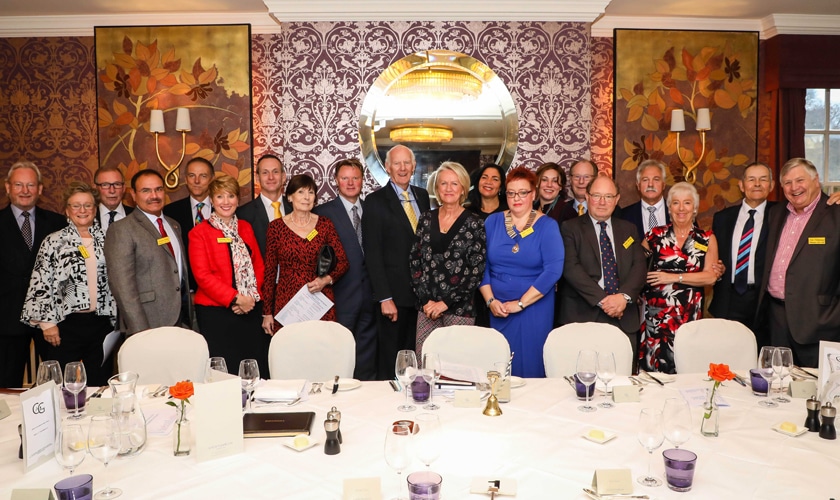 WARM WELCOME:  Guest speaker Sally Taylor MBE, a BBC South Today presenter and journalist, is pictured centre with EAS founder and secretary Stuart Percival, on Sally’s left, and chairman Angie Beeston, in blue, on her right. They are flanked by retired EAS chairmen since 1989; they were made honorary chairmen at the celebration.

Nick Phillips, of architects Barclay Phillips, is Immediate Past Chairman, with Stuart as Secretary/Treasurer and Tricia as Co-ordinator.

CHARITY FUNDRAISER: Nearly £2,100 was raised on the day for Simon Says, which provides child bereavement support in Hampshire. The charity is close to the heart of Sally Taylor MBE, a TV journalist and BBC South Today presenter, pictured, who was guest speaker at the 30th anniversary luncheon.

Deep South Media’s Scott Sinclair, a director, played impromptu piano during the champagne reception at the Lake Suite, which overlooks the Chewton Glen’s gardens and parkland, including the newly-planted oak.

Membership of the Executive Association Solent is drawn from directors, senior executives and partners from firms in industry, commerce and the professions and is open to organisations large and small.

The association is affiliated to a national network of associations, having been founded in San Francisco in 1915 and particularly strong in the USA.

To find out more about the Executive Association Solent, visit this page