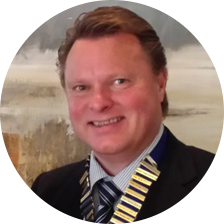 My last few words as Chairman seem almost premature to me. The year has flown by and I now find myself preparing to pass on the honour to Luzia. As previously mentioned I have thoroughly enjoyed the year and hope that you have all made new acquaintances, business contacts and most importantly friends.

One of the hardest tasks as Chairman is to try to encourage new memberships and provide speakers of varied backgrounds that entertain as well as inspire new thoughts and ideas. I hope that you have all enjoyed the speakers that we have had over the last year. Please do feel free to contact Luzia, our incoming Chairman, if you have anyone in mind that you think may be appropriate for the future, as I know that this will aid her enormously.

Our speaker in July was Bob Sharpe, who gave us an interesting insight into the world of crime writing along with some very amusing anecdotes and facts. I personally thought that he was one of the best that we have had and I left the meeting on a high, looking forward to getting engrossed in my holiday books. 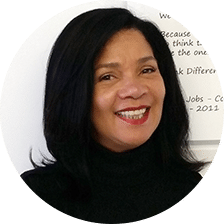 I do hope that everyone has had a good break from work this summer and are looking forward to Luzia’s time in office as much as I am. I am sure that it will be an interesting year for all of us under her Chairmanship and know that she will bring energy and sparkle to the meetings. I know Luzia will be supported well by the two hardest working members of the Association, our secretary and co-ordinator Stuart and Tricia. I must say how eternally grateful I am to both of them for their help throughout, and for their advice when difficult decisions had to be made. I do not know how the Association would continue without their dedication and attention to detail and I hope that they continue their current roles within the association for many years to come.

‘’Business is our Business’’ – but there is no reason why business shouldn’t be enjoyable. I now plan to resume my position as member and with no responsibility, but to take a little more wine with my lunch!

Please note: There will be an AGM at 11am sharp, prior to the luncheon on Friday 18th September

I have always enjoyed a keen interest in all things linked to Horatio Nelson and the history of the Royal Navy. As a young man this led to a personal collection of full dress naval uniforms from the 20’s and 30’s and that included pairs of gold bullion epaulettes, and cocked hats and sword belts trimmed with gold lace.

In 1970 this collection enabled me to secure gold lace for a replica figure of Lord Nelson that my father, a famous local sculptor, kindly built, and that my mother clothed so that I could mount a special exhibition in Hillingdon. From the mid 1970’s onwards I organised annual Trafalgar Dinners – all with special displays of full dress regalia – and over the years the Guests of Honour included several Commanding Officers of HMS Victory, and two Second Sea Lords. 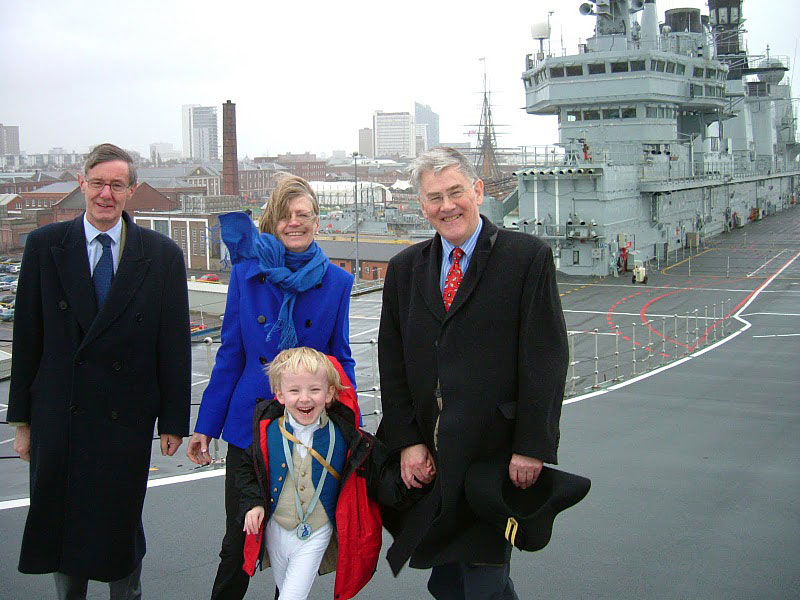 After many years spent as Appeals Secretary at the National Association of Boys Clubs, in 1994 I joined the National Maritime Museum as a fundraising consultant and spent 5 years working on the new Neptune Hall project. During my time at Greenwich I wrote a pocket biography on Nelson for a Norfolk publisher, and appeared in a special Channel 4 documentary entitled ‘Nelson’s Trafalgar’.

Through a chance meeting at Greenwich I was given the opportunity of creating a private Nelson Museum in New Orleans, and the commission included two replica full dress Nelson uniforms, complete with gold medals, orders and, on his laced cocked hat, an exact replica of his famous diamond Chelegnk. One of these ensembles was subsequently presented to the Royal Navy, and can now be seen in the Great Cabin on board HMS Victory 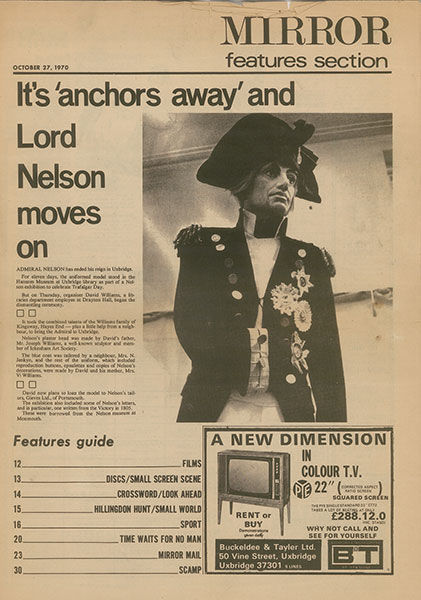 I left Greenwich in 1999to become Corporate Sponsorship Manager for the Royal Armouries based at the Tower of London. However I am still I am delighted that I still asked to give illustrated speeches on Nelson on a regular basis, and in 2008 I was honoured to be allowed to host a private dinner on board Nelson’s flagship HMS ‘Victory’

For the 200th anniversary of Trafalgar in 2005 I was asked to design a range of Nelson commemorative porcelain and that was made by Royal Worcester, commemorative crystal made by Dartington, and a special Nelson fabric – the first of its type in 150 years.

At the end of 2005 I was also asked to create and supply two special Nelson themed Christmas presents – and that were given to HRH The Prince of Wales, and HRH The Duchess of Cornwall. The Prince received a large hand cut Nelson commemorative Dartington Crystal bowl that I had designed, and the Duchess received a specially made diamond brooch, based on Nelsons famous Chelengk and made in white gold and diamonds.

In addition to my role at the Tower, I have sat as a Magistrate at Uxbridge for the past 25 years and received the Freedom of the City of London in July 2009. I am a member if the White Ensign Association and became a Liveryman of the Worshipful Company of Gold and Silver Wyre Drawers in July 2011.