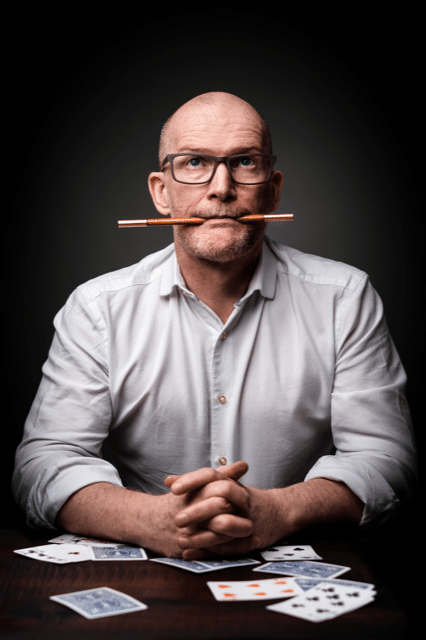 Our Entertainer for the Christmas Lunch, Peter Wardell

Peter graduated University with a degree in Chemical Engineering. He also trained as
an actor and for several years ran his own successful personal training business.
However he left all of that behind to pursue a life as a comedian and magician. He now
fuses great comedy and classical magic to engage and entertain audiences worldwide.
These are performance skills that he honed while working as a performer in London’s
Covent Garden. For over a decade he travelled the world performing at festivals, on
street corners and in town squares, sharing his magic and comedy with audiences of
every nationality.

Early in his magic career Peter won the International Magic, Close-up Magic award and
then he became the first magician in the 100 year history of the world-famous Magic
Circle to win BOTH Stage Magician and Close up Magician of the Year Awards. The
Magic Circle also awarded Peter with the Carlton Award for Comedy and he was
invited to America to perform in the Palace Theatre at the heart of the Magic Castle in
Hollywood.

His eclectic background has made him the perfect performer for both corporate and
private clients and also led to him being asked to host a TV show on the Discovery
Channel.

Peter’s love of travel and his ability to work for an international audience brought him to
working on cruise ships, which he has been successfully doing for the last 10 years.