Welcome back to Chewton Glen following our Summer Break for the Chairman’s Handover Luncheon on Friday 17th September. We welcome our speaker Colonel Debs Douglas from the Royal Signals. 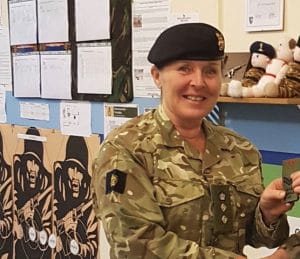 With a B Eng (Hons) degree in Engineering Production and Production Management from the University of Wales Institute of Science and Technology, Colonel Debs Douglas joined the Army in 1988, and after the successful completion of a nine month commissioning course at the Royal Military Academy Sandhurst, commissioned into the Royal Corps of Signals in 1989 as a Second Lieutenant.

Leaders in IT, cyber and telecommunications, the Royal Signals provide battle winning communications to every part of the Army and the Joint Force.
Her early service included the command of a multinational troop providing communications to the NATO Northern Army Group in Germany followed by promotion, and two years at the Army Apprentice College Harrogate designing the training for, and then commanding, the first ever female soldiers that joined the British Army and trained, from day one, alongside their male counterparts.

Following further promotion, now Major Debs Douglas, completed her Regular service commanding a 148 strong unit that provided a mobile Wide Area Networks across the battlefield, which included the planning and management of the relocation of all personnel (including their families) and assets from Bath to York, and a short tour managing the changeover of personnel on Operations in Bosnia.

Whilst managing a farming business, she joined the Army Reserves in 1995 to establish and command a new unit prior to working as part of a team planning National Resilience Communications. In 1999, returning to full time service, she helped establish the Defence Communication Services Agency – bringing Army Navy and Air Force services under one umbrella and then spent six years planning worldwide communications and as a Customer Account Manager for Defence’s technical and medical agencies. During this period, she developed and maintained databases for the Global Operations Security Centre, qualified in defining business system requirements and project management, and played a pivotal role in establishing an interoperable federated network across all three services.

After 6 years developing and overseeing the contracted delivery of trade training for the Reserve Force, now Lt Col Douglas, led the Future Reserves Army 2020 planning for Royal Signals Reserves, for which she was awarded the Master of Signals Commendation. She managed the implementation of this significant structural change before moving to Army Headquarters where she was responsible for Army-wide Reserve and Full Time Reserve Service workforce requirements.

In 2016 she moved to Headquarters Royal Signals where she took on responsibility for personnel policy, recruiting and manning for Royal Signals Reserves prior to being selected to hold the position of “Corps Colonel Reserves” and was then promoted to full Colonel before assuming her current position.

Colonel Debs is passionate about the Corps and its people, and having served on all variations of Army commitments, she is keen to ensure that all sides are fairly represented and integrated.

Married to James, a police officer with Hampshire constabulary and an ex Regular officer of 7th (Parachute) Regiment Royal Horse Artillery, with whom she has 3 daughters, Suzie (25), Kat (19) and Lou Lou (17), she lives in Ringwood Hampshire. She has a disobedient “Clumber poo” called Charlie and her interests include photography, cookery, gardening, charity work, walking, skiing and organising parties and events.